Our national article in this month’s issue titled “Real News That Matters” resonated with me the most and is simpatico with our Fourth of July national holiday.

Independent Media, aka alternative media, is defined as a form of media that is free of governmental and corporate interests.

I anxiously waited to see the film Free State of Jones starring Matthew McConaughey. The story follows the true tale of a male army nurse named Newton Knight who assembled an army of escaped slaves, white army deserters and other young sympathizers against the Confederacy during the Civil War. Knight is a shining example of an independent thinker with alternative ways. Derived from his rebellion also comes his saving graces for women’s rights, young men’s rights, racism, the legal system and their associated politics.

I connect the dots with independent media and our present time frame. We need to be independent thinkers. We are in constant battle over gun patrol, pharmaceutical companies, health choices, the right to know what is in the food we eat, the right to think and choose for ourselves.

Alternative media and like-minded leaders have transformed political, economic and social systems. Nobel Prize winner Amartya Sen’s observation that “no substantial famine has ever occurred in any independent and democratic country with a relatively free press,” reinforces that independent thinking is essential for humans and Earth to thrive.

Mass media, aka mainstream media, reaches the larger audience and has evolved significantly. It has a major impact on our environment, economy and the future of our planet. Alternative media and independent thinking takes more effort. Yet, I believe more people are realizing its worth as it is quickly becoming mainstream. Once it hits mainstream, it will have a greater impact on the collective global consciousness.

Ninety-two passionate Natural Awakenings publishers collaborate monthly to bring our readers free information on alternative ways of living in the world and we make it easily available. We could not do this without the support of our advertisers, distributors and readers. I am continuously ignited and united with new health modalities and discoveries. I am eternally grateful for Natural Awakenings and everyone involved who help to make our magazines possible each month.

I hope you thoroughly enjoy this month’s issue. Thank you for thinking for yourselves and believing in us. 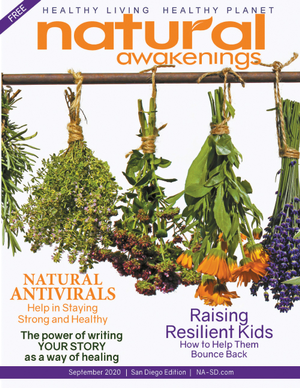